Tom Polera is a retired Chief Fire Marshal with over forty years of fire service and law enforcement experience as well as previous private sector fire investigation experience with a forensic engineering firm. He holds a bachelor’s degree in Public Safety from Siena Heights University and is a Certified Public Manager from George Washington University. 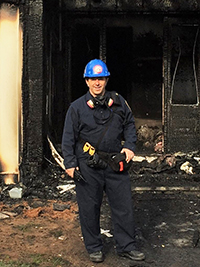 In 1981, Tom began his fire service career with the Arlington County, Virginia Fire Department after serving as a volunteer firefighter in Fairfax County. In 2004, after graduating from the Virginia Fire Marshal Law Enforcement Academy, he was assigned Investigations Commander. In 2005, Tom was sworn-in as a Task Force member with the U.S. Department of Justice – Bureau of Alcohol, Tobacco, Firearms, and Explosives and was a participant in the investigation of series of arsons that plagued the Washington D.C. metro area. In 2011, Tom was hired by the City of Falls Church Police Department was named its first Fire Marshal. He served as a member of the Police Department Command Staff as well as the City’s Coordinator of Emergency Management. In addition to fire prevention and investigations, Tom is the program developer of the "First 12 Minutes" active shooter response program. This program received national acclaim in 2019 at international conferences including IACP and NFPA. He is a Program Specialist for NFPA 3000 - Active Shooter Hostile Event Response and holds instructor certifications in additional public safety programs including NIMS and ICS. Tom has been a guest instructor for variety of origin and cause programs from forensic high school courses to ATF Post-Blast training. Tom has accumulated several thousand hours of documented training and education from the local, state, and federal levels and from the private sector including the AFT Advance Arson program. Tom achieved and maintains numerous fire and law enforcement certifications including NFPA Certified Fire Protection Specialist; IAAI Certified Fire Investigator; NAFI Certified Fire and Explosives Investigator, and NAFI Certified Fire Investigator Instructor. He has previously served on the Board of Directors for the Virginia Chapter - IAAI and as training coordinator for the Northern Virginia Joint Committee on Fire and Arson Investigation. Tom currently serves on the International Chiefs of Police, Arson-Explosives Committee.